Salad of thick beans and zucchini

The Thick Bean is the

The vegetable stalk in front of the box was a lot clear. The fat bean is - ah, well - thick, huge, firm and soft at the same time and one can only imagine that in these voluminous shells small precious bean cores are sleeping. In any case, a big bag came home.

If I had to award a Red Dot Design Award for the best packaging, I would without hesitation exclaim "And the winner is the fat bean". When you open the Thick Bean, you work your way through a dense, wadded and styrofoam-like layer. In this layer are embedded wonderfully secure, dimensionally stable and protected from all external influences, the small shimmering bean seeds. Since the plant has really come up with a lot to bring the "offspring" safely in the world. Probably packaging for electrical appliances has been copied from the Dicken Bohne since time immemorial.

So you have to do a lot of work to free the small bean kernels from their packaging. Depending on the pod you will find between two and six bean seeds. The pile of empty bean pods grows rapidly beyond the kitchen table, while a small but exclusive pile of bean seeds gathers in the bowl next to it. 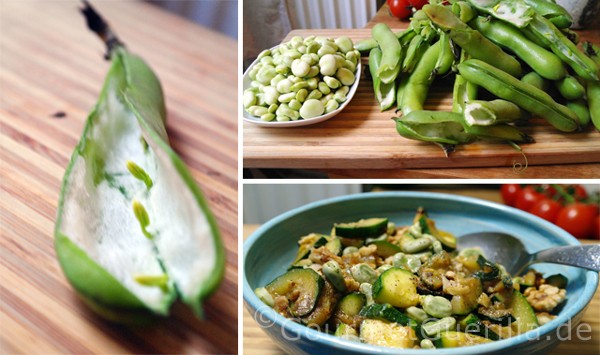 In any case, the hard-won yield does not get into the soup, but becomes an exciting salad from the BBC GoodFood 5/2011. That's what we (the fat bean and myself) deserve.

Here's how it works:

Cook the bean kernels in salted water for a few minutes. The beans should lose the "raw" taste, soften but still have bite. After 5 minutes, try and cook if necessary for a little longer. Then drain and quench under running cold water. Drain and place in a bowl.

While the beans are cooking, wash 2 courgettes , halve lengthways and slice. Fry in a sip olive oil in a pan. Salt, pepper and add a pinch of chili . Turn the zucchini more often, they should be golden brown from all sides. Then remove from heat, allow to cool slightly and add to the beans in the bowl.

In the same pan, briefly toast 3 tablespoons of walnuts and then roughly chop.

From 4 tablespoons olive oil and 2 tablespoons white wine vinegar stir a dressing, pour over the beans and zucchini. Season with salt and a strong dash of fresh black pepper . Stir well and then sprinkle with the walnuts.

Very tasty! I just like these vegetable, rich (but not heavy) salads to eat. 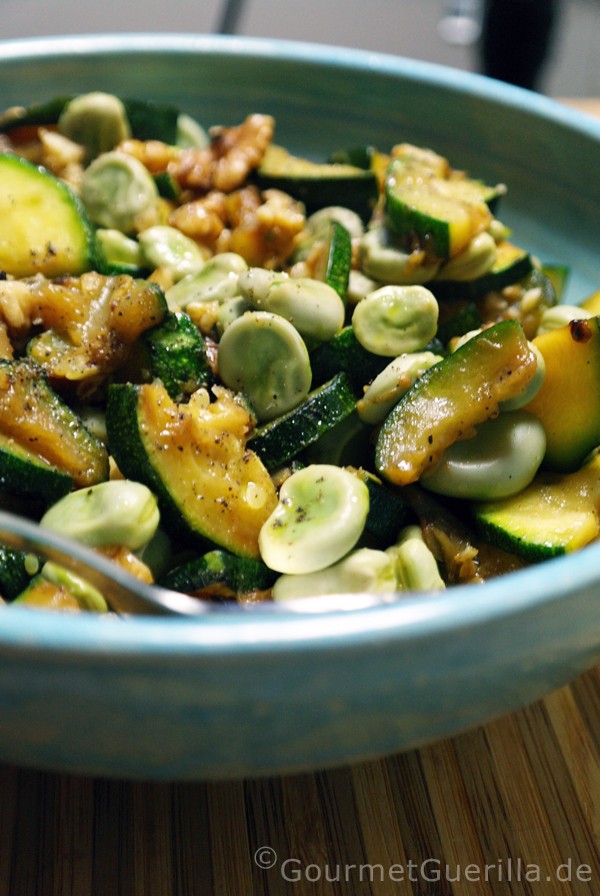